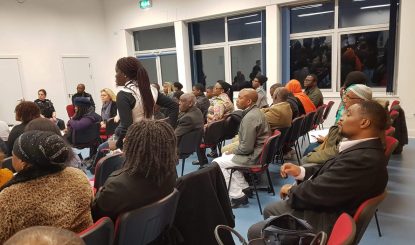 At the ADF, we are passionate about culture. In association with the Art Centre MK, it is our pleasure to take part in the organising of workshops and events to educate people and give a hands-on experience with the value of beads in the ADF community.

The history of beads is a rich one, with beads being part of many cultures for hundreds and even thousands of years. As a significant part of culture, we will discuss beading in this blog post. We will discuss a brief history of beads, the symbolism of beads and how you can get involved in the excitement beading can provide.

The origin of beads dates back many years. Ancient African beads have been found to be made of stone or bone and are often beautifully carved and coloured. Beads were also used in trading. When Europe and Africa met as continents to trade, the Europeans found that their currency was not accepted by the local communities. However, European technology meant that Europeans often carried glass beads. To the native African tribes and communities, these were exquisite works of art. In fact, some beads became so sought-after only prominent people and royals were allowed to use the beads. Soon, beads became a sign of wealth and prominence. Many ancient beads remain in African families today, having been passed down as family heirlooms.

Function of Beads In African Culture

There are many functions of beads. Beads and beading, as mentioned, are engrained in culture. Why? Put simply, not only do they look amazing, but they also have practical uses in cultural terms as well as physical terms. As we will soon discuss, beads have a symbolic nature and can help with identity. However, they also have a physical benefit – they may be worn as decoration, but also as functional pieces to aid with body contouring and other such methods to beautify oneself.

Symbolism is also an important part of beading, with colours being assigned meaning. Blue symbolises the sky which provides water for people and cattle. Thus, blue means sustenance and energy. Green represents land and pastures which provide nourishment to people and animals. Red mirrors the colour of blood, symbolising danger. However, red also symbolises bravery, strength, and unity. Black symbolises daily hardships but also harmony and solidarity. White represents milk from cows which provides sustenance. It also symbolises purity and good health. Orange symbolises warmth, friendship, generosity, and hospitality as it represents the colour of the gourds that store milk that is to be shared with visitors, as well as animal skins which are laid out as beds.

Beads are also important in showing where a person is in their life cycle. Birth, puberty, marriage, and death are all represented by beads. One may have waist beads to contour the body during pregnancy, for example. The transition from girl to woman may be shown through beads. They are also used as jewellery and as a show of affluence, prominence, and wealth. Beads may be used in death rites to show honour to the deceased, as currency or as part of traditional custom of the area.

Recently, we held an event where an African representative from the ADF met with the Police at the Community Centre. We have scheduled this as an annual event to reinforce the fact that the police and the Diaspora can indeed have a healthy, friendly working relationship together. The police have always helped us at the ADF achieve our goals. For example, since the inauguration of the annual ADF Festival event, we have been happy to see the police supporting the event and keeping it safe. We are glad to have an even stronger relationship with the police after the meeting. It is important to help young people recognise that the police are there to help and are working hand-in-hand with the ADF to remove racism from our communities and create a better community cohesion. We are happy to work alongside the police in achieving our goals and our aim to create a Milton Keynes community with a sense of Umoja – ‘oneness’.

Recently, we have held our annual AGM. At our highly successful meeting, we updated our action plans. During this year, there has been an increased perceived conflict between African youths and the police force. Sadly, with the death of George Floyd in the USA, there have been tensions between African-descended people and the local police forces.

In the UK and in Milton Keynes, this is no different. We want to encourage a better relationship between the forces and African youths in the local community, talking to our young ones about how the police are here to help us and protect us but also helping educate our hard working forced about how to sensitively and tactfully deal with Diaspora youths. In the meeting we decided to communicate directly with the forces and collaborate with them to help achieve a greater understanding between the Diaspora and the police force. We look forward to seeing our plans from the AGM coming to fruition in the near future and provide a safer, better future for the Diaspora and the wider community

During the Covid-19 pandemic that has engulfed the world, the ADF (the African Diaspora Foundation) has been trying its hardest to provide for those most in need in the Milton Keynes community. While the news media has often focussed on the so-called “bigger issues” such as the economic effects of lockdown, politics, and the recent easing of lockdown, the ADF has been listening to the voices of those who are suffering silently – those who are unrepresented by the media. This includes families, communities, individuals and cultural minorities who call Milton Keynes “home”.

Since April, the ADF (in collaboration with the Food Bank and SOFEA) have been vigilant in helping the communities most in need of support, distributing food to those who really need it. Suffering silently, these communities and families have struggled during lockdown and may have felt that their voices were not heard. However, the ADF have made sure that these groups have certainly had their voices heard, and we are happy to supply them with the necessities they need during this tough time, respect them and, perhaps most importantly, listen to them.

We have seen a particular need in area of Milton Keynes as Fishermead, Bletchley, Springfield, and Tinkers Bridge. Evidently, families across Milton Keynes have needed our help. Most of those we help are large families that have been affected by Covid-19. While the media focussed on the “wider picture”, these are the families directly effected by the effects of lockdown and of Covid-19 itself. With job losses, furlough wages and other sources of income stripped away, families in particular have found it hard to support themselves during the pandemic.

In addition, many of these families have lost a loved one due Coronavirus (perhaps even the main breadwinner of the family) and have relied on ADF for support. Further, some live a long distance away from their family and friends and have been unable to shop for themselves, perhaps due to shielding regulations or other problems.

The African Diaspora Foundation has been able to help with this. Hundreds of families around Milton Keynes are linked with our strong support networks and services and can now rely on ADF to make sure they are safe, well-fed, and supported during this global pandemic. Although we cannot remove Covid-19 from the community, we are happy to be able to support others and help them cope through these challenging times.

However, we ourselves are not immune to the economic effects of Covid-19 and the effect it has had on our charity work and funding. We want to thank other community groups for reaching out to us and donating food and money to us. This has meant we have been able to reach out to these “silent voices” in Milton Keynes who desperately need our help